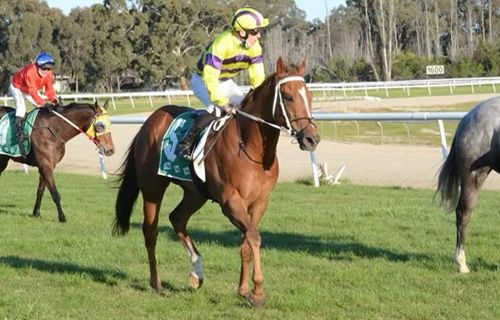 Trainer Andrew Dale’s decision to heavily target Corowa’s meeting on Tuesday instead of his home track reaped dividends after landing a winning double.

Dale had nine runners at Corowa despite Wangaratta also racing on the same day.

The stable struck early in the meeting after Strawberry Swing took out the $24,000 Maiden Hcp, (900m) with claiming apprentice Hannah Williams aboard.

It was the three-year-old fillies fifth career start after finishing third at Albury earlier this month.

Williams produced a patient ride, stalking the early pace before driving through a gap 100m from home to snatch a slender win.

Racing manager Frazer Dale admitted there were some anxious moments as he watched the race unfold.

“I was a little bit worried because she is a speedy filly but got stuck behind them,” Dale said.

In a busy finish Loy was able to lift Tabloid Star across the line and edge out Vela and race favourite Nicotera.

“I though it was an impressive win,” Dale said.

“He has always shown his fair share of ability and we took him back in grade last preparation to build a bit of confidence at non-TAB level.

“We were able to break through again today in a Benchmark 58 company and he is a horse more than capable of going through his grades.

“He has only just turned four and has got potential.

“He will be rated around the 67 mark in Victoria and we’re hoping he might be able to gain a start in a heat of the Country Series at Benalla next Friday on cup day.

Dale said it was satisfying to land a double at Corowa with most of the stable’s runners better suited at the NSW meeting compared to their home track of Wangaratta.

“We just thought the horses were better placed at Corowa,” he said.

“We thought Wangaratta would be a lot more competitive but as it turned out some of the locals managed to land a few winners.

“So we decided to avoid the meeting but with hindsight it probably wasn’t as strong as we expected.

“But we headed to Corowa with a bit of confidence and to come away with a double was a nice result.”