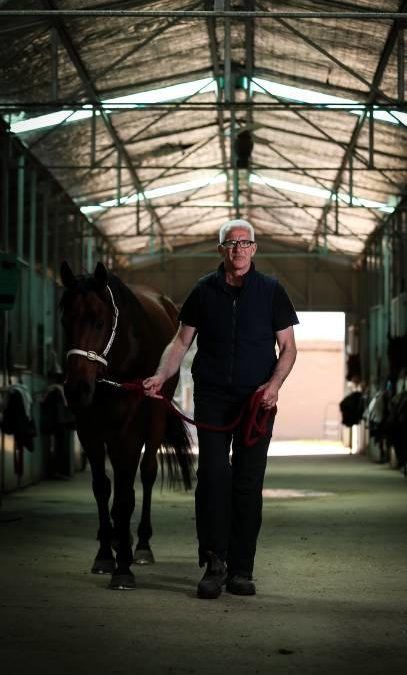 Albury horse trainer Graham Hulm says Lord Von Costa’s visit to Flemington on Tuesday will be the toughest race of his career.

The four-year-old will contest the second-last event of the Melbourne Cup meet, over 1200 metres.

“There’s a number of horses which have won a lot of races,” he said.

“He’s drawn barrier 17 so that’s pretty good, he should get a bit of cover there.”

Lord Von Costa has had 10 starts and failed to land a place only once.

And that was in his last start back after a spell, running fourth in Geelong.

It was a thrilling finish, but Hulm says the competition is now at another level.

“This will be his toughest race by far, but he’s been improving,” he said.

“It’s my first runner in the Cup carnival, so it’s exciting for everyone involved,” he said.

Lautaro has won five of his 19 starts, with six placings.

Stephen Baster will ride the five-year-old gelding, just after partnering Secret Number in the Melbourne Cup

While Flemington will carry the nation’s attention, the Border and North East will also host meetings.

Both Corowa and Wangaratta have six-race programs.

Dale has Shelbyville in the fifth race at Wangaratta.

Shelbyville is coming off a half-length win at Wodonga last Thursday over 2050 metres.

Dale also has three horses at Corowa, starting with Swinging in the first.

“He’s first up after a four-month spell, and has won before at Corowa,” he said.

“He’s probably been a little disappointing and hasn’t lived up to what we thought.”

Biding Time is the last of Dale’s contingent at the Border track.

“He’s been disappointing as well,” he said.

Corowa is hoping for at least 2000 people.

“Albury isn’t racing, and all the feedback we’ve had with bookings and buses indicates it should be a big crowd,” Corowa Race Club’s Sheridan Kay said.

“There’s a host of activities for the kids, live music, as well as Fashions on the Field, so it should be a great day.”

Both of the region’s meets start just after 1pm.

And even though there’s no racing at Albury, due to the track renovations, the club will still host an event day, featuring a big screen in the beer garden and live music.