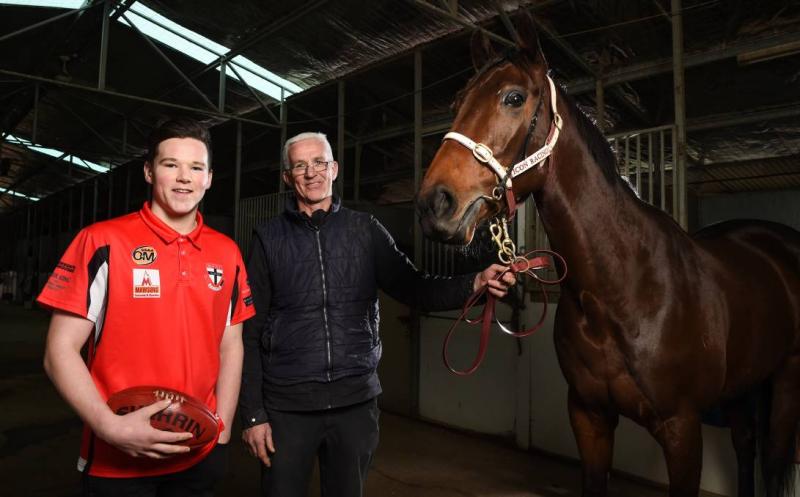 LACHIE Dale’s passion for horses and football is a closely-run race.

It’s a photo finish whether he’d rather play in a victory for his beloved Myrtleford Saints or help father Andrew prepare a winner at the race track.

”Maybe the horses. As long as I’ve backed it,” the 18-year-old laughs.

He got a taste of victory when Lautaro saluted at Albury just over a week ago and will be hoping for more of the same after recently being granted his strapper’s licence.

Football and horse racing have always gone hand-in-hand for the Dale family.

Former Myrtleford coach Andrew gained his training licence in 2014 and it’s something Lachie, and brother Frazer, have a keen interest in.

“I’ve been coming down here getting a feel for the horses, just trying to get comfortable with them,” he said.

“I’m just learning the way it all works.

“With Frazer, we’ve always loved it, we’ve enjoyed watching dad train the horses on race day especially. Maybe one day, me and Frazer can train together but at this stage I’m really enjoying doing the strapping and that sort of stuff.”

In the meantime, Dale will have to settle with forming a partnership with his brother on the football field.

The pair will take to Bunton Park on Saturday as the Saints look to cement their spot on the top five against sixth-placed North Albury.

It will be Frazer’s fifth senior match for the Saints after returning to Victoria from a stint at South Adelaide.

The former Carlton rookie has been a key to Myrtleford’s resurgence with the Saints winning three of the four matches he has played when free of VFL commitments with Footscray.

“That was always something we were waiting for, I thought it might have been a bit further down the track but it popped up and he came down which was awesome,” Lachie said of playing with his brother for the first time against Lavington in round five.

“I said to him ‘when you’re down there, try and shank a few kicks so you can get back home’ (more often).”

Dale is expecting a fierce contest against the Hoppers, who took the points at Myrtleford in round three but have lost four of their past five matches.

“They’re in a bit of a slump but it’s always a good match between these two teams,” he said.

“Last time it was a really close game but they ended up getting out in front on us. Hopefully we can pay them back this weekend.”