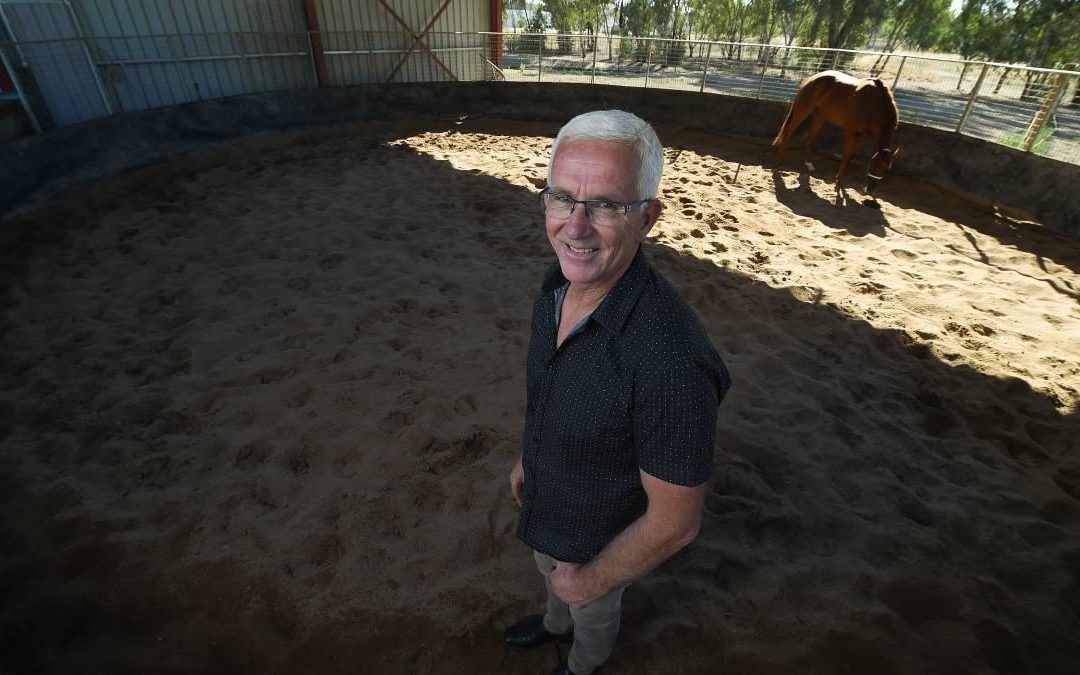 ANDREW DALE is on the move. After just over four years of travelling from Myrtleford each day to train at Albury, Dale is relocating to Wangaratta. He spoke to the Border Mail’s BRENT GODDE about the move and how he is looking forward to expanding his training operation.

BRENT GODDE: I believe you are relocating to Wangaratta shortly. What’s the main reason behind the move?

ANDREW DALE: It’s still a couple of months before it happens but it’s a great opportunity to benefit from the great training facilities that Wangaratta offers. The Wangaratta CEO, Paul Hoysted, was headhunting new trainers and was selling the fact they have spent millions on new infrastructure including new stables and a state of the art fibre sand training track which is an all-weather surface for training. At this point of my training career it was an offer that was too good to refuse. Travelling from Myrtleford each day is also becoming a drag.

BG: So you still live in Myrtleford. What time do you usually have to wake up and what does a typical day involve?

AD: I can get to Wangaratta from Myrtleford in 35 minutes compared to Albury which takes 60. I’m on the road by 3.30am every day.

BG: Training horses is a tough gig. Was it tougher than you thought establishing yourself as a trainer and what have been some of the biggest hurdles to overcome?

AD: It has been a real roller coaster ride. For example you can win a race and then a couple of months later it is taken off you by something out of your control. You can win the Country Championship qualifier and be racing in Sydney for $500,000. The next week you could be at Tumbarumba and your horses perform poorly and its a long trip home. You invest a lot both financially and emotionally into training and when your horses don’t run as well as expected it is disheartening. You make a lot of sacrifices in this game that often go unrewarded.

BG: Hindsight is a wonderful thing. Is there anything you would have done different if you could have your time again?

AD: I would have started training a lot earlier. I didn’t start training until I was 50 and have had my licence for a bit over four years. I also would have liked to be better equipped financially. My wife and I worked hard to get to a stage that I could start training because I didn’t want to take too many risks and invest everything into the horses. I actually did the course and studied to be a trainer 20 years ago and had all the qualifications and certificates.

BG: Who are some of the people who you credit to helping you get this far?

AD: Obviously Rob Wellington has been a big supporter. He originally trained horses for myself and a group of footy mates. Then I asked him if I could start working at the stables a couple of days. I didn’t have much practical skill in the industry and all my principals on training were based on human athletes rather than equine with my football coaching background. I owe him a lot.

BG: What are some of the best pieces of training advice you have received from other trainers?

AD: Before Bede Murray passed away he once told me if you buy a tried horse, pay the courtesy and respect and listen to the trainer or the owner you bought it off. Agree with everything they say and then do the complete opposite because the reason they are getting rid of it is because they can’t get it to go. Brett Cavanough also once told me you won’t go broke training winners and don’t be afraid to sell your horses. He said horses aren’t poodles – you don’t fall in love with them. Cav also said don’t be afraid to take your horses anywhere you think that they can win. The cash is the some colour at Tumbarumba or Tumut as it is at Albury.

BG: How many horses do you train and what do you feel would be an ideal number at your new stables?

AD: The Wangaratta facility can stable 20 horses. At the moment I’m training anywhere between 10 to 13 horses.

BG: Its been two years since your biggest success with Lautaro in the Country Championship Qualifier. It must have been a huge thrill to have a horse race at Randwick over the carnival?

AD: It was an incredible experience. We did a lot of work to get the horse ready for the race. I remember vividly in the lead-up that I brought him in from the paddock about 14-weeks before the qualifier. After about five weeks of training the horse was jumping out of its skin and there was still nine weeks before the race. So I put him back in the paddock for 10-days to give him a bit of a let-up. Nick Souquet was riding all his trackwork and was confident in the lead-up that Lautaro would run a race. There is no doubt Lautaro winning is my best training performance.

AD: I do. Especially at those smaller meetings where it may be a country cup and know there will be a good ring. You might get eight to ten bookmakers working. Like Berrigan for example. There is plenty of bookmakers so you can get a decent bet on.

BG: I also heard you copped a speeding ticket travelling to the stables one morning and lost your driver’s licence for a while?

AD: That’s correct, I copped a few speeding fines and lost all my points and lost my licence for six months. I actually rented Jodie Bohr’s house in Racecourse Road for six months to make life a bit easier.

BG: I believe you recently purchased some well bred yearlings?

AD: As a group, we recently purchased a nice little filly at the Inglis Classic sale. We also purchased another one from New Zealand. We have also got plans to buy another one at the upcoming Melbourne Premier sale or Adelaide. I’m hoping they help lift the standard of the stable. One is a nicely bred Kiwi gelding and the other is a filly by Casino Prince.

BG: Would it be fair to say that purchasing yearlings gives you optimism and something to get out of bed for each morning?

AD: I guess training horses is a bit similar to coaching football and the parallel’s are similar. Your senior players have over 100 games experience and are similar to your older horses that keep the till ticking over. Your 50-100 game players are the four and five-year-old horses that are about to peak in their careers. While your two-year-olds are like the draftees and are being prepared for the future and you could find your next champion.

BG: Buyers just don’t rock up to sales and buy any yearling on offer. How did you pinpoint which yearling you were going to buy?

AD: So my oldest son, Frazer, works for Peter Snowden. With Frazer’s connections we were able to get some experts in bloodstock industry who helped us pick which horses to buy. We had X-rays and scopes done, weighed-up our options and were guided by the experts before making a final decision.

BG: Your son Frazer played two games for Carlton. You obviously would be proud of the achievement. Do you support his decision to pursue a career in racing considering he is only 25?

AD: I would of loved for Frazer to have a career as an AFL footballer. But I think he lost his passion for football because he had been playing at a high level for so long. After going to Assumption College, playing TAC Cup and then being drafted to Carlton he had basically been living and breathing football for six or seven years and he was mentally burnt out by the time he was 23. But he loves his racing and is in a good stable with the Snowden’s and I’m 100 per cent behind his decision.

BG: You coached Myrtleford, do you get to many games these days?

AD: I’m still passionate about Myrtleford and I can’t get to enough games. I still try to help the club out where I can and was involved in luring Jake Sharp as coach this year. He is an impressive young man and has been like a breathe of fresh air at the club. My other son Lachie still plays there and said the buzz and enthusiasm around the club is at an all time high.

BG: Who do you rate as the best jockeys locally?

AD: There is probably none hotter at the moment than Blaike McDougall. I remember he jumped a horse out for me when he first arrived last year and Nick Souquet was standing next to me and said ‘this kid will absolutely brain every jockey around here.’ He was right. Jake Duffy has been incredibly supportive over the last 18 months and his excellent industry knowledge and talent as a rider has seen me improve no end as a trainer and his efforts to travel weekly to ride my fast work have been super and greatly received. I also have to mention Souquet because he rode Lautaro to victory in the Championship qualifier.

BG: Which local trainer do you admire most?

AD: The hardest worker trainer that I’ve see in Donna Scott. She is probably under-rated and is the next up and coming trainer in our region.

BG: A lot of trainers are singing the praises of the surface of the track at the moment. What has sparked the improvement.

AD: Two words – Luke Garland. The difference he has made in six weeks has been unbelievable. Everyone is thrilled to have him back. You only have to talk to the jockeys that ride your trackwork. Jake Duffy, Blaike McDougall, Brodie Loy have all said what an incredible difference there has been in the track. It’s good timing with Albury set to host the Country Championships followed by the Albury Cup carnival.