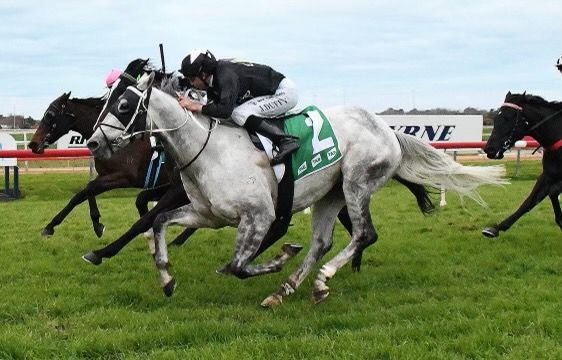 Chairman’s Choice is back in the winners circle after saluting in a thrilling finish at Wagga on Tuesday.

After several near misses in his past five starts Jake Duffy was again the man to steer the six-year-old gelding to victory.

On a heavy track the speedy grey claimed the final race of the day storming down the outside to win the Benchmark 58 Handicap (1200m).

Duffy has ridden Chairman’s Choice in all three of his victories for Andrew Dale Racing.

“I’ve got a great affiliation with the horse. (He) had a really good run in transit and I was able to just get him in the right spot,” Duffy said.

“In a couple of the other rides I’ve done on him I’ve held up for a bit longer than I probably did today, but with the way the track was racing I had to get going a little bit earlier.”

Chairman’s Choice has been a picture of consistency since joining the stable 12 months ago collecting three wins and eight minor placings in 17 starts.

Chairman’s Choice lets down with a big finish to win the last at Wagga! pic.twitter.com/D63o4thV8f