Dale and McDougall combine for winning double at Berrigan 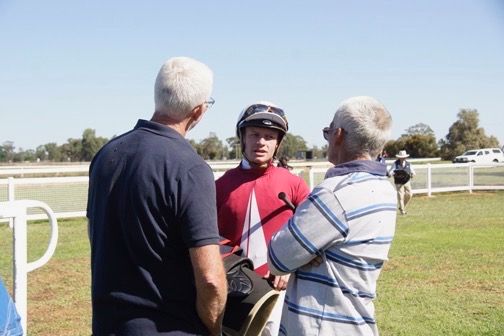 Berrigan continues to be a happy hunting ground for Andrew Dale with the Wangaratta-based trainer collecting two wins there on Saturday.

Dale now has six wins from 16 starts at the venue after Blaike McDougall guiding short-priced favourites Suburbia and Geileis to victories in races four and five.

Suburbia’s triumph in the feature Finley Autumn Cup was the gelding’s third victory in his past four outings and second straight win at 1400m.

Geileis collected her first winner’s cheque under Dale, saluting by one and a half lengths in the final race of the day.

The wins topped a strong day for Dale after Abyssinia finished second in the 1400m Maiden Plate while Tycoon Dreaming just missed the placings on debut for the stable.

“This is a meet we always look forward to and it’s great to come here and have some success again,” Dale said.

“All four horses produced good performances, so we’ll take a good amount of confidence out of the weekend.”

Star jockey, McDougall continues to produce for ADR with yesterday’s wins his fifth and sixth for the stable.

The 25 year-old has also achieved eight other placings and boasts a 6-4-4 record from just 26 rides for Dale.