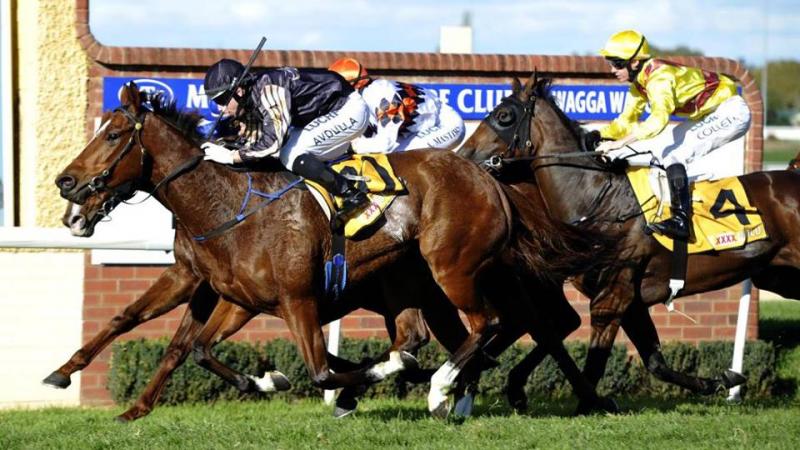 ROOKIE Albury trainer Andrew Dale hopes to win an extension from the owners of Itsmycall after landing another Cup day success at Wagga on Friday.

Dale has only held his trainer’s licence for six months but is proving to be a Cup day king after claiming the $35,000 The Rules Club Queen of the South Benchmark 70 Handicap (1400m) with Itsmycall ($17.00).

Dale enjoyed his first winner as a trainer on Albury Gold Cup day in March with Itsmycall and the mare produced the goods again on Wagga’s feature race meet.

Sydney jockey Brenton Avdulla made it two wins from two rides on the mare with a well-timed finish.

Dale was proud to again enjoy success on the biggest day of racing in the Southern District.

“I’ve only had my licence for six months so to win on the two big Cup days is fantastic,” Dale said.

Dale, a former AFL player with Melbourne, only recently took over the training of Itsmycall.

The six-year-old mare has previously enjoyed stints with Cieran Maher and Stephen Brown in Melbourne.

An ownership dispute had the mare sitting in a paddock when Dale’s offer to train her was taken up.

He has enjoyed two wins from five starts but now faces losing the mare as the owners look to send Itsmycall to top trainer Darren Weir.

“Even right now the owners are looking are sending her to Darren Weir,” Dale explained.

“She is really well bred and has already had one city win and I suppose she can be a pretty valuable broodmare prospect if she can win a couple more in town.

“So I’m hoping they reconsider because she’s only had five or six starts with me for two wins.

“This was my grand final with her today because the owners gave me five runs with her.

Dale has been quick to build his team with 10 horses in work at his Albury base.

He thanked fellow Albury trainer Rob Wellington for all his work helping him get started in his training career.

Dale has spent plenty of time involved in football but took up training after a business and teaching background.

Itsmycall scored by a half neck and took her record to five wins from 22 starts.

The win gave Avdulla a double.