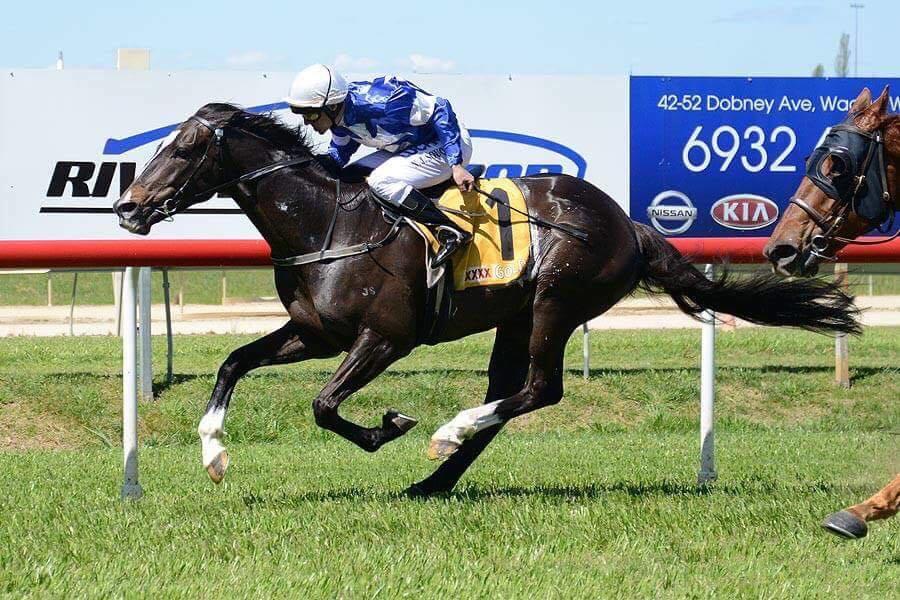 A lot of hard work and patience has finally payed off with Footmark breaking through for his first ever victory on Saturday.

Running at Wagga in the Maiden Handicap (1600m), five days after running fourth at the same track over 1200m, jockey Nick Souquet guided the horse home by three quarters of a length.

Starting from barrier seven Souquet rode patiently from the outset before fighting off a challenge from short priced favourite Leica Bita Magic as the two pulled away from the rest of the field down the stretch.

Trainer Andrew Dale said it was great to finally salute with the five year-old gelding who is owned by John and Ross Spalding.

It’s been a patient build up to this point after Jim suffered a tendon injury early in his career before finally debuting in July.

“He is owned by two of our biggest supporters John and Ross Spalding who have been terrific clients in helping us kick start Andrew Dale Racing,” Dale said.

“They currently have two horses in work with us Footmark and Pacific Tycoon and ironically raced Footmark’s mother Maibonie to five wins.”

Dale said Footmark’s preparation had been hampered with wet weather but he had done all he could to be ready for the mile second up on Saturday.

“We were hesitant on backing him up quickly but he came through Monday’s run really well and when the fields came out it looked a winnable race so we took our chances,” he said.

“We knew from his previous performances he would run the mile out strongly, he has had a strong grounding having been in work since April.”

There are no immediate plans for Jim besides working off the calendar and finding the right races for him.

“We’re encouraged by his progress and will be hoping for more success down the track,” Andrew said.