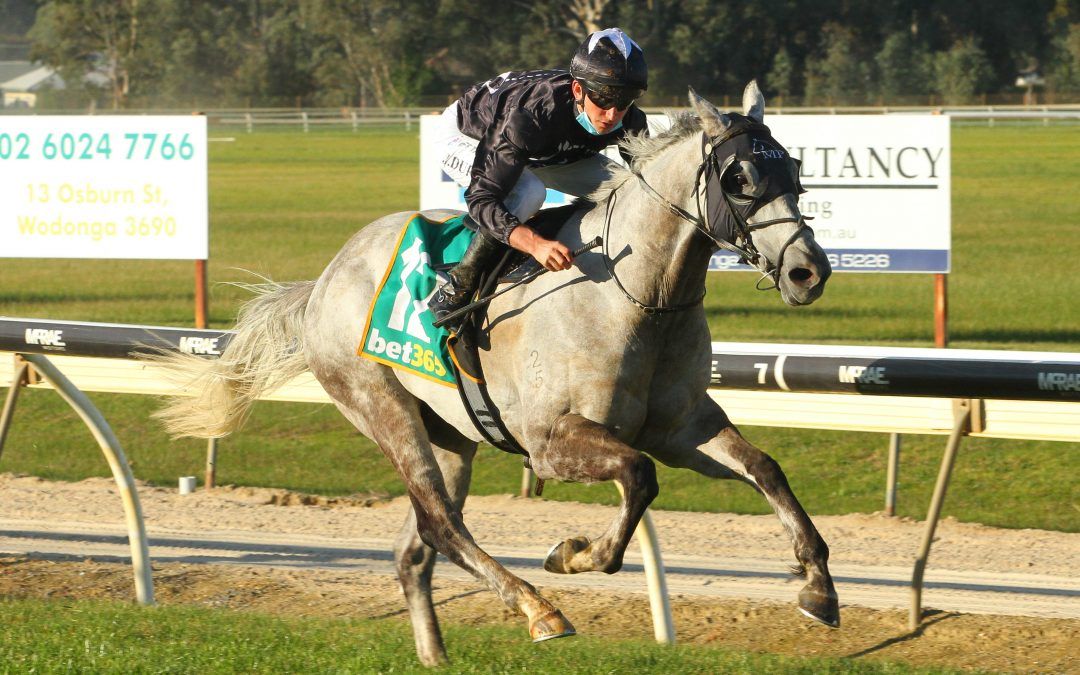 THE acquisition of Chairman’s Choice into the Andrew Dale stable is reaping dividends.

The four-year-old gelding ran home for his second win for the stable and fifth overall at Tatura on Saturday, justifying his $6.80 favourite odds.

The grey gelding and hoop Jake Duffy settled towards the back of the field before swooping around the turn to set up a barnstorming finish down the straight.

However, just as Chairman’s Choice started to muster up his turn of foot at the final 150m, the gelding was interfered with by Swift Hit who went on to win the race.

“He copped interference at the 150m mark and had his rightful run taken away,” Dale said.

“He managed to dive late and was just beaten so we lodged a protest and managed to have some luck in the stewards room.

“He’s had some luckless runs this preparation so it was nice to get some luck and be successful in our protest.”

Amazingly, since joining the Dale stable from Natalie Jarvis, the gelding has failed to finish unplaced, notching up two wins, four seconds and a third from his seven starts this preparation.

Dale said his come from behind racing pattern has meant luck hasn’t been on his side in some of his starts.

“His general pattern is to hold him up as long as you can because he’s got a quick turn of foot which separates him from other horses,” he said.

“The nature of the way he races means it can be a luckless style but he’s been a great addition to the stable.

“Two wins, four seconds and a third with around $40,000 worth of prize money has been great.”

Chairman’s Choice joined the stable as a 48 rated horse and has raced in benchmark 58 or 0-58 company in all of his starts for Dale.

But now, with his rich vein of form comes a jump in rating.

“We purchased him as a 45 rated horse so he has been quite easy to place,” Dale said.

“That becomes a bit harder now because he’ll probably jump into a benchmark 62.

“He’s taken on every challenge we’ve put in front of him though so we’re confident he’ll continue to progress.”

“We’ve had something like 12 placings so if those results go your way you’re looking at eight or 10 wins which would be even better.

“I think the pleasing things were when the close photos at Corowa with Tabloid Star and Strawberry Swing went our way last week.

In racing you can be extremely unlucky but if you consistently turn up it’s going to turn your way eventually which it’s starting to do now.”

Dale will now turn his attention to next Saturday’s non-TAB meet at Corowa.

“We’ll take a team to Corowa next Saturday where we think we’ll have a few horses nicely placed,” he said.

“We’ll take six or eight horses there and then will look at Benalla on Friday as well which will be a strong race day.”