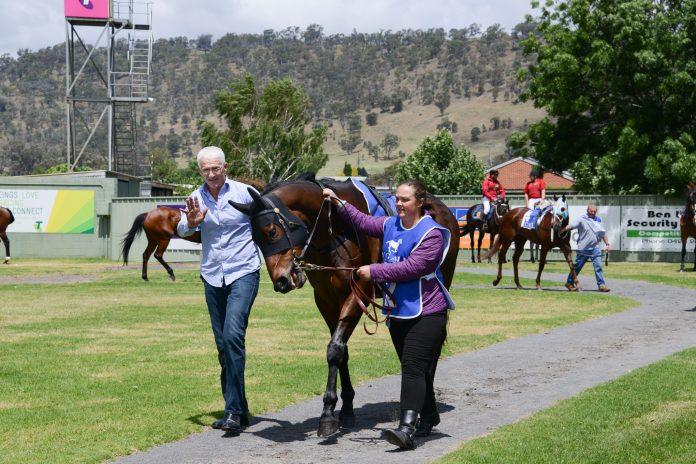 As race goers prepare for the Wodonga Gold Cup, one trainer reflects on success last year and reminds us all that it’s never too late to chase your dreams.

When former Myrtleford football coach and physical education teacher Andrew Dale decided to pursue a career as a racehorse trainer in his early 50’s, many would have questioned his wisdom.

“IF YOU WANT TO MAKE IT IN THIS INDUSTRY YOU’VE GOT TO TEST YOURSELF.”

Not surprising for those who know him, in a few short years his passion and determination has seen him produce several winners and lay the foundation for a successful business.

“Most people in this industry have had conventional backgrounds, working in stables, around trainers, working as a foreman, but I didn’t,” Andrew said.

“I’ve come in and learnt from the bottom up, crammed everything into a short period of time, making a lot of mistakes along the way, but I think I have learnt a lot more doing it that way and been able to get to where I want to a lot quicker.”

A highlight in his short career was winning the Ollie Cox Memorial Trophy at the Wodonga Gold Cup race day last year with Shelbyville, which he hopes to win again this year.

“It was good, because it was the first running of the Ollie Cox memorial and Brian (son) is a respected horse man in the region, so to win that race was fantastic,” he said.

Dale has also ticked another box, with his first city runner Lautaro racing at Rosehill in July.

“It was great to take him to Sydney and although he was a bit out of his depth in the race, it was great experience and I think he’s a better horse because of the trip,” Andrew said.

Lautaro was also accepted into the high profile Oaks Day race-day at Flemington early in November.

“We didn’t have high expectations, it was more about acquitting ourselves, getting him ready for a big race in front of 60, 70 thousand people.

“If you want to make it in this industry you’ve got to test yourself.

“I didn’t want to be a trainer at 51 years of age to be mucking up boxes, I wanted to develop a good small business, have ten or 20 horses in work, have a couple of staff, some good owners and try and make a living.

“The way to do that is to test yourself, try and find the right horse that can compete on those bigger stages, and if they can, fantastic – if not, keep going until you find that one that can take you there, so that’s the plan.”

While the former football coach barely has time to reflect, given his busy schedule which often starts with driving from Myrtleford to Albury for a 5am start, he’s proud of what he’s achieved in a short period of time.

“It’s almost an example to myself to do what you want to do,” he said.

“So if it seems you can’t get to where you want to, sometimes you’ve got to say, ‘I’m just doing it’.

“I have a great family and a very supportive wife who’ve helped me all the way through.

“You go in blind to the fact it’s a very costly, expensive industry, but I couldn’t be happier.”