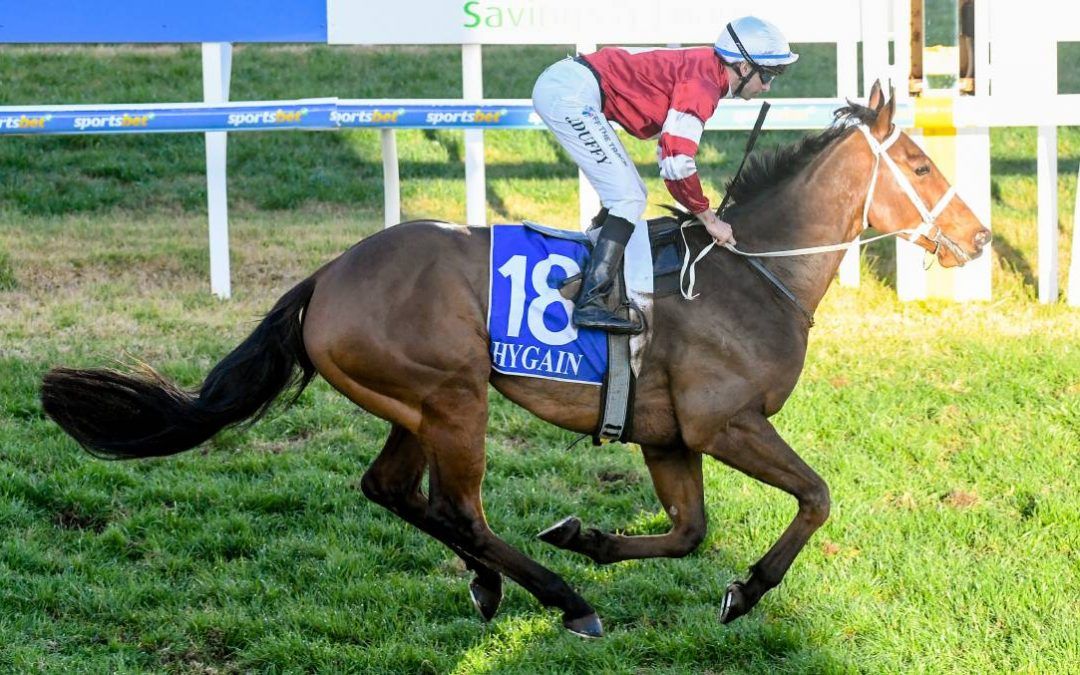 The Andrew Dale-trained Stonefield has blitzed his rivals to score by five-lengths in his first start for the new stable at Wangaratta on Monday.

Formerly trained by Leon and Troy Corstens, Stonefield was dropping back in grade in the $27,000 Benchmark 52 Handicap, (1400m) with Jake Duffy aboard.

Lumping a hefty 63kg, Stonefield settled near the tail of the field before Duffy started to weave his way through the field from the 600m mark.

The 3.80-favourite hit the front 300m from home and careered away for an effortless five-length win.

Racing manager, Frazer Dale, said Stonefield was on the stable’s radar after having run second to Shiny Rock who was one of four winners for the stable at Corowa last month.

“We have only had the horse a short time but it was an impressive debut for the stable,” Dale said.

“Dad purchased the horse on the Inglis Digital Sale recently after he finished second behind Shiny Rock after he was unlucky not to win that day at Corowa.

“So all the credit goes to Dad who backed his judgement and we have got some new connections in the horse who have now had a couple of winners already.

“The horse arrived in terrific order and was ready to race.

“He looked well-placed dropping back into Benchmark 52 grade on a heavy track which suits the horse.

“To his credit he had to lump the big weight but he has been competitive in Benchmark 64 grade so had a class edge on his rivals.”

Frazer was hoping Stonefield could prove competitive in some of the lesser grade country cups in the autumn.

“We are hoping he can measure up to races like the Towong and Corowa Cups in March,” he said.

It was the stables first winner of the new season after Dale was able to land a career best 36 winners last season.

Dale has been slowly building the stable and has 25 horses in work to now be one the biggest stables in the North East-Riverina.

Only Albury trainer Mitch Beer and Wangaratta’s Ben Brisbourne have bigger numbers with Donna Scott having a similar amount.

“Mitch Beer and Ben Brisbourne would be the two biggest in the North East-Riverina,” Dale said.

“We had 36 so in regards to the number of winners it puts our stable in the top-five for the region.

“Looking ahead we will have the majority of our 25 horses racing by September.

“So to have that many racing you are looking at nearly 50 starters a month and if you look at that over 12 months, it’s a lot of runners.

“So we are going to be really busy this season and it’s going to be pretty exciting to see where some of of our younger horses can get to.”