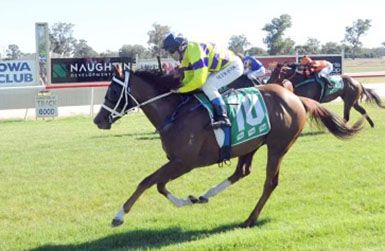 Running a slick time of 50.32secs, Strawberry Swing saluted by a length and a quarter after leading all the way to the line.

While it was an impressive run, jockey Michael Travers said Strawberry Swing did her best to throw away the win after drifting out in the straight.

“Today she didn’t want to hang, she just became unbalanced and wanted to drift out.”

“She was going so well I just allowed her to stay on her own path.”

It was the second win of Strawberry Swing’s career after she broke her maiden at Corowa over the same distance in September.