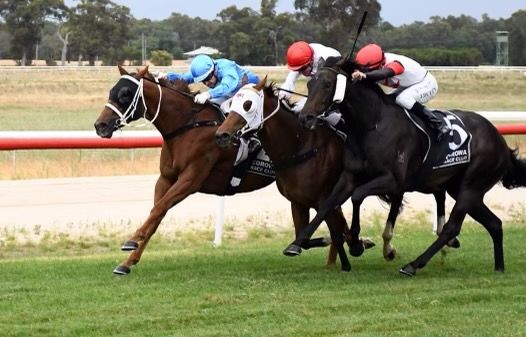 Recent Andrew Dale Racing acquisition Crimosa has saluted in his third start for the stable.

Stepping up to Benchmark 66 grade at Corowa on December 28 the five-year-old gelding held on for victory in a photo finish over 1200 metres.

It was Crimosa’s first win in more than a year after starting his career with back-to-back triumphs.

Racing manager Frazer Dale said it was a good result with Corey Parish on board for the second straight race.

“He just missed out on the placings in his first two starts running fourth in both,” Dale said.

“This was his second time at 1200m and Corey got him to the front early and did well to hold off the two favourites.”

Crimosa was a $13,000 purchase at the Inglis Digital Late November Sale.

Crimosa hangs on for his first win for the stable at Corowa yesterday. pic.twitter.com/WWqL2EP4q8