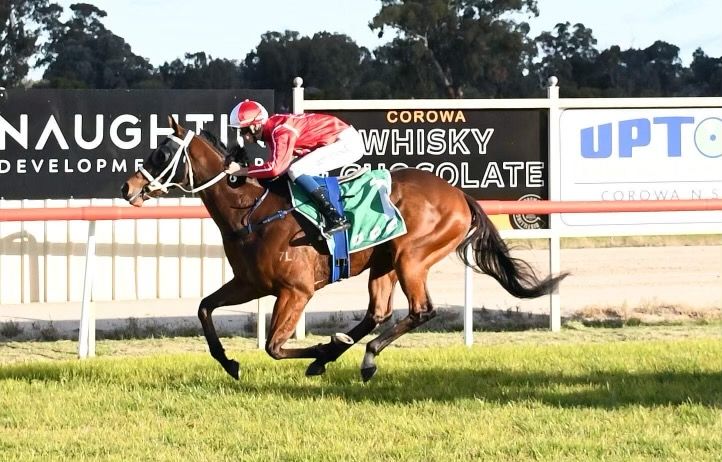 The Andrew Dale-trained Mojo Music was finally rewarded for some recent consistent performances with victory at Corowa on Monday.

Mojo Music resumed from a 15-week spell over the Albury carnival and had one win and three minor placings from six-starts this campaign.

The three-year-old gelding was finally able to notch another win in the $24,000 Class Two Handicap, (900m) with Jett Stanley aboard.

Stanley was given an armchair ride over the sprint trip after stalking race favourite and early leader Incentive ($2.50-fav) throughout the run.

Mojo Music ($3.20) surged to the lead close to the fence turning for home and careered away over the final furlong to score a convincing 1.75-length win over Little Hela.

Incentive stuck on well in the home straight to finish third.

“It was a pain free watch and it was nice to see for the owners,” Dale said.

“It’s no secret that Corowa suits on pace runners, so it was nice to land in a prominent spot from the good draw.

“The horse boasts a consistent record and is just starting to find winning form of late.

“He was carving a reputation as a bit of a bridesmaid there for a while after running so many placings.

“But he has now found that winning form now and hopefully he can hold that sort of form for the rest of the winter.

“He really thrives on rain affected tracks and is relatively lightly raced for a three-year-old.

“So we have kept him nice and fresh and specifically targeted this time of year.”

Mojo Music is raced by a large syndicate of owners including Stephen Spiteri who is one of the stables biggest supporters.

“The horse is raced by quite a few of the bigger stable supporters including Stephen Spiteri,” Dale said.

“The horse races in Stephen’s colours and there is a lot of local owners from Wangaratta in the horse as well.

“He is certainly one of the more popular horses in our stable.”

The victory was the second leg of a winning double for Stanley.

He also took out the opening race, the $24,000 Maiden Handicap, (1000m) on Pretty Panda for trainer Russell Osborne.